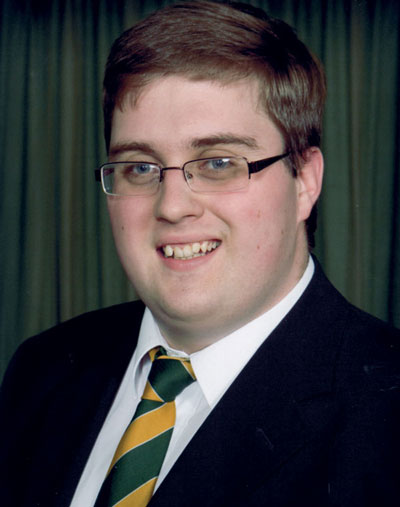 During 1997, at the tender age of eleven, Matthew joined the Cymric Choir as a trainee Accompanist, becoming the Choir’s Accompanist in 2005 and subsequently the Deputy Musical Director. prior to being appointed to the role of Musical Director in October 2015.

Matthew was born and brought up in Port Talbot and has been involved in music from a very early age.

Matthew attended Neath Port Talbot College studying National Diploma in Musical Theatre and AS & A level Music under the tuition of Rhian Lloyd and Dr Huw Davies, and also Vocal Coaching with Llinos Haf Richards. Whilst in college he accompanied many of the major college musical theatre projects and was the accompanist for the Associated Board and Trinity Singing Examination.

Matthew has also been the accompanist of the Ospreys Supporters Choir, Neath Polyphonic Choir and Organist of the Neath Male Choir. In 2006 he was appointed accompanist and subsequently became Musical Director of the Bois Afan Male Choir.

During 2012 he was appointed as the Musical Director of Côr Serenata Ladies Choir and in 2013 he became Director of Music of the Rectorial Benefice of Aberavon.

Matthew has accompanied many soloists and instrumentalists in a variety of concerts in all over Britain and in several European countries.

One of the highlights of every year for him is being the Liturgical Organist for the Diocese of Llandaff’s Pilgrimage to the Shrine of Our Lady of Walsingham in Norfolk.

Matthew works as a freelance musician and provides tuition in Organ and Piano studies and he also a tutor of Vocal studies.

Angharad started piano lessons at the age of 4 and the
harp at 8 years old. She continued studying the piano up to
and including her time at Cardiff University despite her
main instrument of study at university being the harp.
During her award-winning career as a harpist Angharad
has performed with artists such as Bryn Terfel, Elin
Manahan Thomas and Katherine Jenkins as well as
performing for and meeting Queen Elizabeth II. Angharad has travelled extensively with her harps, performing throughout Wales, Britain and other European countries such as Spain and Finland. Her recorded music has been broadcast worldwide.

Angharad’s love of accompanying began in Ysgol Ystalyfera 6th form, where she accompanied her friend for her ‘A’ level flute and cello recital. She also accompanied two school choirs, both of which won prizes at the Urdd Eisteddfod. Angharad continued to accompany various instrumentalists and singers at university and was also repetiteur for productions of Trial By Jury, Bugsy Malone and Dido & Aneas. She now conducts and accompanies her school choir at Ysgol Gymraeg Rhosafan and has recently joined the Cymric and Côr Serenata choirs.